Abstract art is the wing of a reckless angel touching your unconscious soul.
–Max Zsol

On a field trip with my high school English class to the art museum at the University of Utah, most of my classmates, I noticed, were actively looking while they were in the museum, but once they stepped outside, they went blind to the world around them. “Art is only worthwhile,” I thought, “if it teaches us to see the world more richly.” Since that realization, abstract art has helped me see the colors, shapes, and textures around me for their own sake, a way of seeing I have tried to capture in photography. In this post, I give credit to some abstract artists who have influenced my photographs, as I previously gave credit to modern, figurative artists who have influenced my work.

Although the painting Nocturne in Black and Gold–The Falling Rocket (1875) by John Whistler is representational–it shows a falling rocket –it is probably the earliest paintings to approach abstraction, as the image is less important than its coloring, shading, and mood. The work is exemplary of the Art for Art’s Sake movement (1850-1872). Whistler’s painting did not directly influence my photography (since I did not know about it until I began researching for this post); however, its dark background stained with patches of light influenced other artists who inspired me to take my photo Light on a Black Door (2017).

Similarly, Henri Matisse (186-1954) came close to non-figurative abstraction in his painting French Window at Collioure, (1914). Originally, the painting had more detail, as shown by pentimenti, or underlying layers of paint. Matisse simplified the painting until the view of Coullioure, the original subject, was completely obscured. Above, I compared representational art to a window showing a world beyond itself. Ironically, this painting is not even about the window, but its abstract shapes. Compare Matisse’s painting to the vertical composition of my photo The Tracks of a Drag Queen (2017).

The Tracks of a Drag Queen #glitterabstract

The Swedish painter and painter Hilma al Klint was one of the first to approach pure abstraction, as in this painting Svanen (The Swan), nr 17, Group 9, Series SUW (1914-1915), but as a theosophist, she was actually trying to represent spiritual realities beyond the physical world. You can find a similar homage to the primordial circle and exploration of color in my photo Cutoff Wheel for an Angle Grinder (2017)

Wassily Kandinsky (1866-1944) was at the forefront of abstraction, this “pure art” entirely about itself. Compare his exuberant and joyous Small Worlds no. 1 (1922) with the untitled abstract photo below (a collaboration with Omar Rodriguez-Rodriguez), a photo of a curb, paint, grass, and shadows, a direct homage to Kandinsky.

The Czech artist František Kupka began his career with representational paintings, which morphed into pure abstractions long before most of his contemporaries. He was especially interested in color and shape, as you can see in his painting Amorpha: Fugue in Two Colors (1912). Compare it to my photo Broken Advertisement Light Box (2017), which has a similar asymmetrical composition focused on shapes flowering from a central point. Even though my photo is not about the colors as was Kupka’s painting, I had a similar interest in shading and light.

Around 1913 in Russia, Kazimir Malevich (1879-1935) founded the Suprematist Movement (1915-1925), whose name announces “the supremacy of pure artistic feeling” over naturalistic depiction. The suprematists depicted geometric shapes, especially squares, rectangles, and triangles with a limited pallet of colors, but you can also see a love of lines and shapes in the subtle interplay of cracks in his infamous Black Suprematic Square (1915). Such paintings drew my attention to the interplay of cracks in a seat cover.

Piet Mondrian (1872-1944) developed a non-representational form called neo-plasticism and was a prominent member of the De Stijl movement. “De Stijl” is Dutch for “the style,” a movement that championed abstract form in simple vertical and horizontal compositions of black, white, and primary colors, as seen in his painting Broadway Boogie Woogie (1942). I was trying to capture similar effects when I took this picture of a a brick building through a glass brick.

Jackson Pollock (1912-1956) was a proponent of abstract expressionism, an art movement centered in New York in the 1940s, the first American modern art movement to gain international acclaim. Pollock would let paint drip from his brushes as he waltzed around his giant canvases, recording the experience of painting, but before he had fully developed the technique of drip painting, he made this partly figurative and partly abstract work Guardians of the Secret (1943)–four figures hold a rectangular image that is purely abstract: the secret. I chose this image because it is one of my favorite Pollock’s, and it most closely resembles my photo Truck Bed Pollock (2017).

One of my favorite abstract artists is Clyfford Still (1904-1980), whose paintings  earn the label “expressionist” better than most because of the powerful emotions his canvases convey. Look at his painting Untitled (Formerly Self Portrait) (1945). Note the dramatic use of bloody reds, set off with dark patches, and compare it to my photo Abstract in Manzanita Bark (2017), an homage to Still.

Mark Rothko (1903-1970)  was called an abstract expressionist, but he rejected the label: “I’m not an abstractionist. I’m not interested in the relationship of color or form or anything else. I’m interested only in expressing basic human emotions: tragedy, ecstasy, doom, and so on.” Rothko makes a mistake here, falling into the either/or fallacy, assuming that his paintings must be about either emotion or form and color. Form and color are the means by which he achieves emotional impact in his painting Blue, Green and Brown (1952). In contrast, I recognize that I am creating a mood through form, color, texture, and lighting in my photo Vault Lights, Prism Glass (2016). Prism glass, or vault glass, embedded here in an Oakland sidewalk, allows light into the underground chambers below. Is that a blue sidewalk, you ask? Of course, the colors are enhanced. I have no problem editing my photos, as I am not trying to represent reality, so much as recreate it.

Associated with the beat movement in the San Francisco Bay Area, Jay DeFeo spent about eight years creating her most famous painting The Rose (1958–66). She kept applying more white and gray paint, sparkling with mica, with a palette knife until this ten and half feet high painting was about a foot thick and weighed more than a ton. When she was evicted from a Fillmore street apartment, it had to be removed with a forklift from a window that had be widened. Trapped for many years behind a wall at the San Francisco Art Institute, it was eventually rescued and restored, a story that adds to its stunning spiritual power. My photo The Big Bang (2016) is of a much smaller scale, but has a similar starburst image, radiating outward from its center in which I saw the origins of the universe.

Frank Stella challenged the idea that paintings must be rectangular or even flat, and so he is part of the school of post-painterly abstraction. It was clear that his works were the ends in themselves. He wanted you to look at them directly, and not at anything that they symbolized. He loved to the interplay of line, form, and color, as you can see in Star of Persia II (1967), a hint of which you can get in my photo of Art Deco Tiles, One White, One Green.

Richard Diebenkorn(1922-1993), who was directly influenced by Matisse’s French Window at Collioure and View from Notre Dame, was also a second generation Abstract Expressionist and a founder of the Bay Area Figurative Movement, borrowing theory and technique from the abstract expressionists, but returning to figurative representation. Although his painting to the left Ocean Park No. 67 (1973) seems purely abstract, it is actually a representation of an ocean park, as the name announces. Diebenkorn’s simple compositions helped me to see the beauty in the lines and shapes in Ocean Park Through a Water Bottle (2017).

Barnett Newman called this painting Onement 1 (1948) his breakthrough and the vertical band, which he called a “zip,” made with masking tape, became a signature of his work. Paintings like this helped me appreciate simplicity in an image, especially the simplicity of vertical lines separating broad fields of color in Red Lines (2017). I think verticals are dynamic and dramatic, especially as viewers scroll through photos in their Instagram feed, a format that is itself inherently vertical. 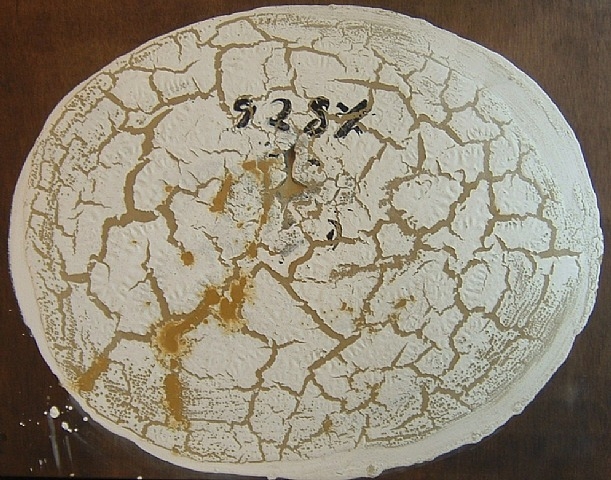 Antoni Tàpies (1923-2012) was a Catalan painter and sculptor, working in the Pintura Matèrica style, using non-artistic materials like clay and dust in his works like Oval Blanc (1990), which emphasizes material, texture and shape, as does my photo Homage to Tapies (2017), a picture of a hole in the paint of a wall, showing older marks and colors underneath.

Compare also, Alberto Burri‘s Bianco Cretto (1977) with my picture Cracked Table Top (2017).  Burri was an Italian painter involved in art movements such as Neo-Dada, Nouveau réalisme, postminimalism and Arte Povera. He insisted that his own and critic’s explanations of his works were useless. Instead, he wanted the view to experience them directly without the filter of words and interpretation. My photo Table Top with Cracked Paint (2017) may encourage more interpretation, but my interest is the cracks.

Sol Lewitt, associated with Conceptual art and minimalism, explores the interplay of line in this Small Etching/Black & White, no. 7 (1999), which reminds one of contour lines on a map. I found similar patterns in this bleached wood one day when I was hiking: Patterns in Sun-Bleached Wood (2017).

Abstract paintings helped me see color, shape, and texture more richly, and I hope that my photos can do the same for you. There is beauty in almost everything around if you know how to look at it. So, the next time you are stepping over a bottle of broken wine or garbage in a gutter, take a picture.

Portrait of Ronosaurus Rex in Barbara Hepworth’s Pierced Monolith with Color (Photo by Omar Rodriguez-Rodriguez) (Check out the first post in this series Modern, Figurative Art Reflected in Ronosaurus Rex’s Photos. Follow Ronosaurus Rex on Instagram. Check out his abstract photos in the books #abstract. and #abstract2. Read more about abstract art in Abstract Paintings are Metapaintings)